The G5040 Kombi merges baler and wrapper into one unit and can be combined with all common round balers. The finished bale is “picked up” directly from the wrapping table and wrapped. The entire work flow is perfectly optimized! The electronic system controls the entire work flow in fully automatic fashion! 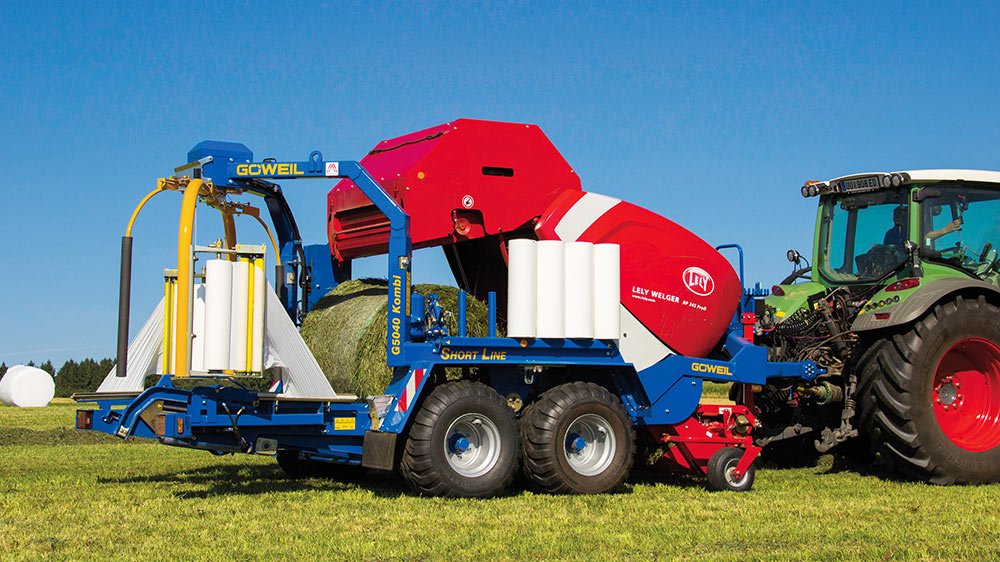 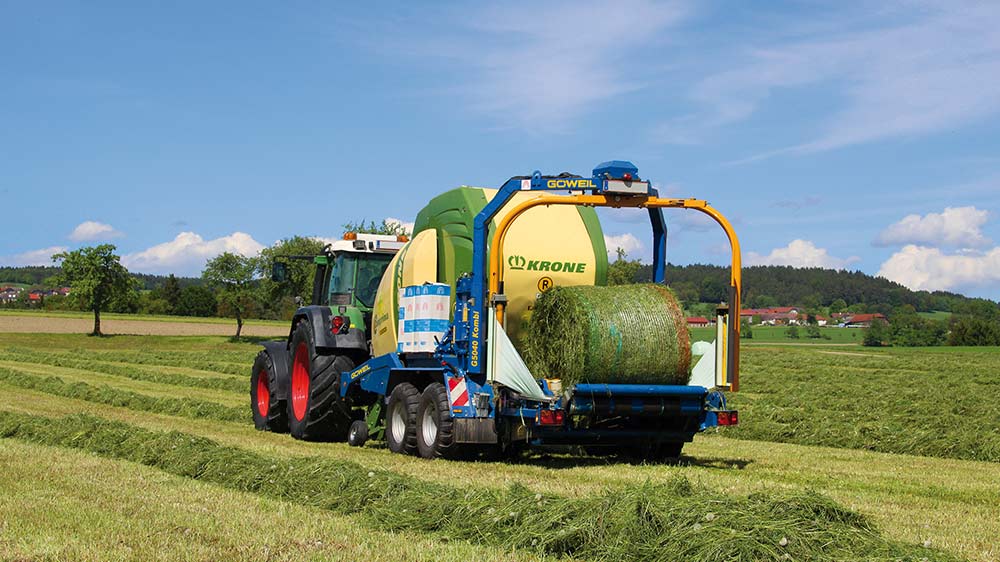 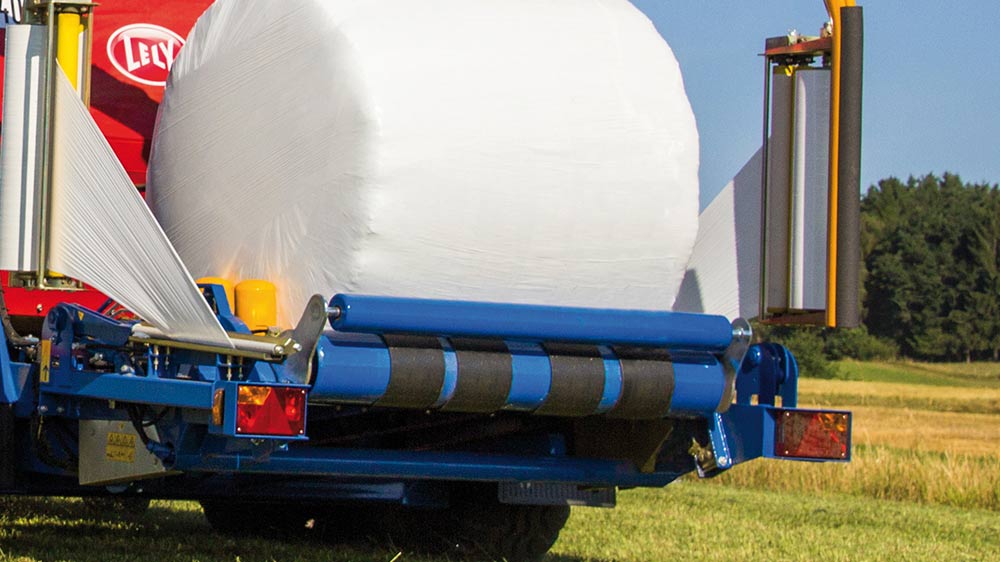 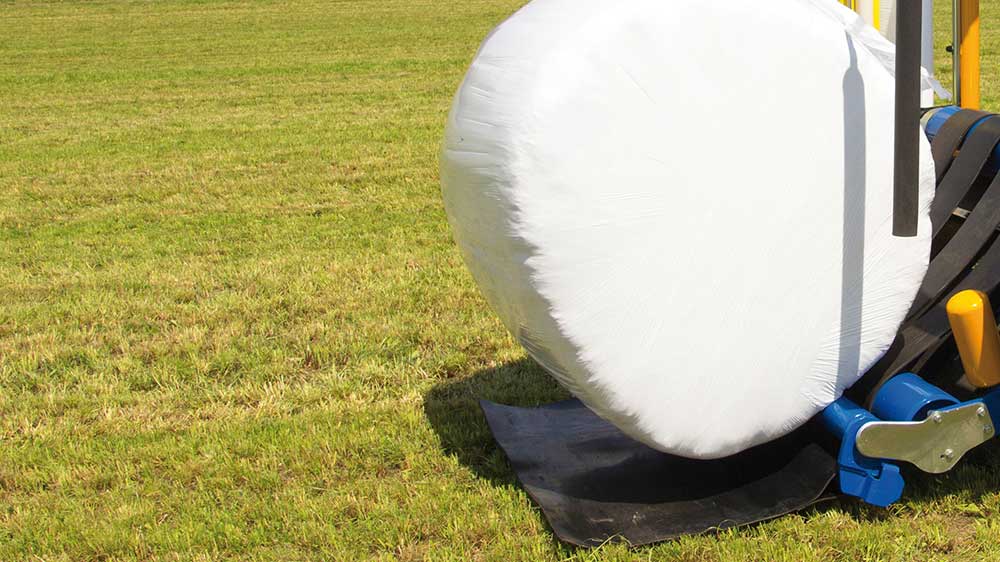 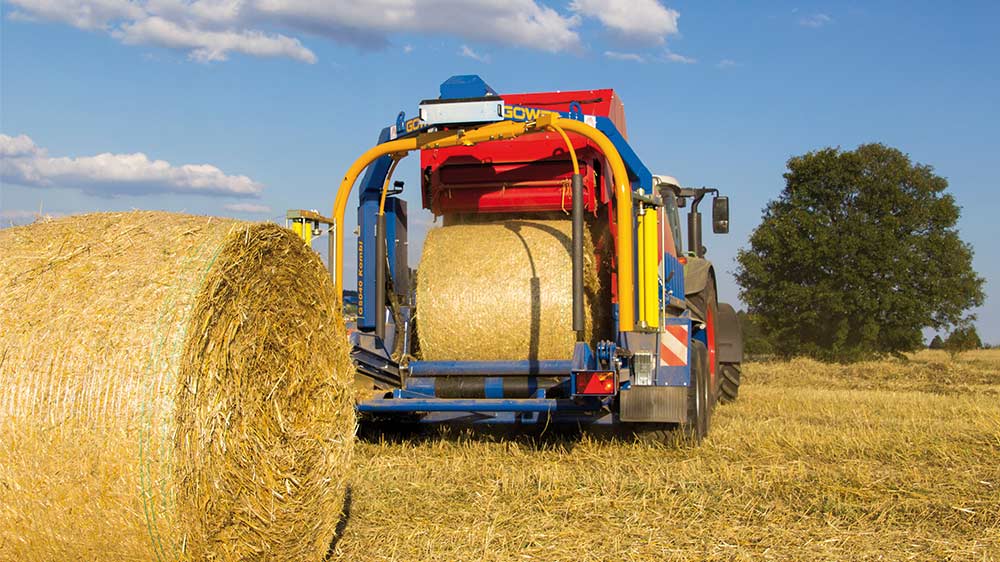 The G5040 Kombi can be installed into all standard round balers. 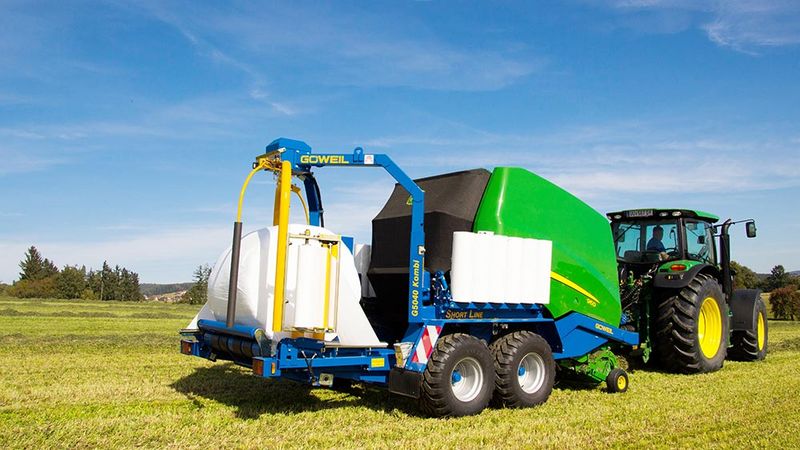 The robust and solid construction and workmanship of the frame guarantee an exceptionally long lifetime of the baler-wrapper combination. The G5040 offers outstanding agility and is gentle on the sod thanks to its compact design and the narrow spacing of its axles. In addition, its low center of gravity allows for a level of maneuverability that is second to none even in slope positions. 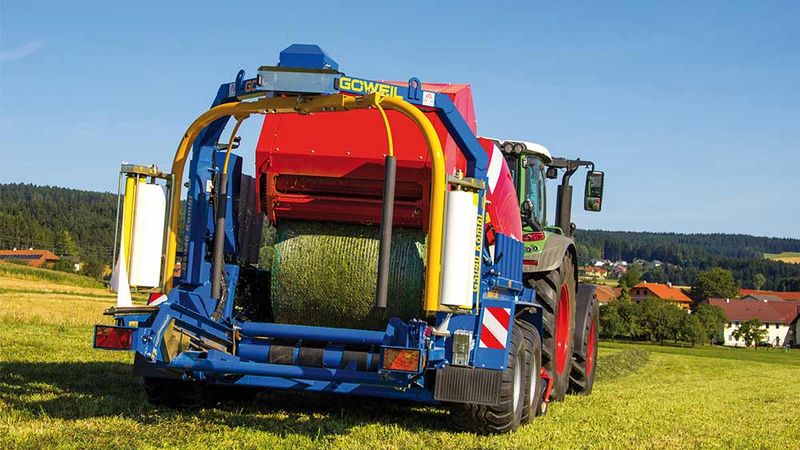 The manual controls come in particularly handy when the machine requires maintenance and servicing. They allow the operator to control all functions directly at the machine. The driver can easily leave the program control in the tractor cab when he, for example, needs to change the film or replace blades on the baler. 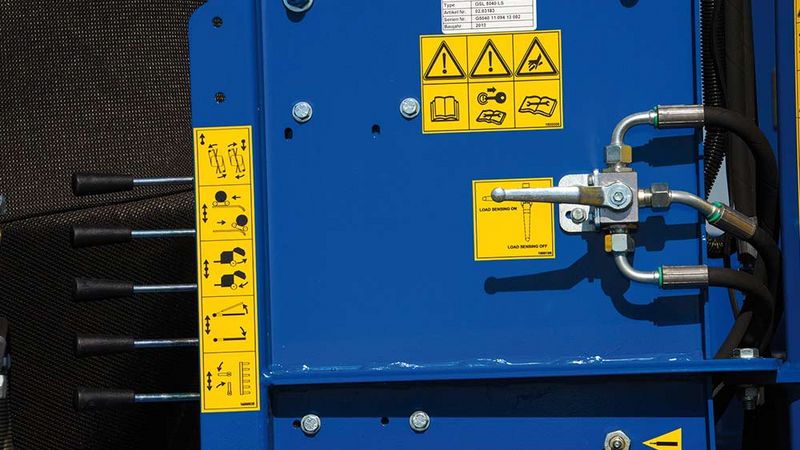 You cannot achieve a high daily output without a sufficient supply of film. The two film holders on the G5040 Kombi allow you to carry along a total of up to ten rolls of film. A hydraulic tilting device lets the operator load or remove film with ease and at a comfortable working height. This makes it possible to wrap approximately 200 to 300 bales depending on the bale diameter and the number of film layers.

The G5040 Kombi always offers superior handling and control – whether you are traversing a field or transporting it on the road. The frame is mounted on a tandem axle chassis that is supported on 500/50-17 tires. The narrow axle spacing allows the machine to operate in a way that is gentle on the soil and smooth even when you are traveling on the road at 40 km/h. Customers can opt to have their baler-wrapper combination equipped with a dual-line air brake system or a hydraulic brake system.

This system reliably prevents the bale from falling off as it is not subjected to any kind of centrifugal forces. The conveyor belts and the four rotating bale guide rollers guarantee that the bale will continually move forward and, consequently, ensure a uniform overlap of the film. When it is time to drop the bales, the mobile wrapping table is lowered all the way to the ground. This provides for a gentle deposit of the bales. 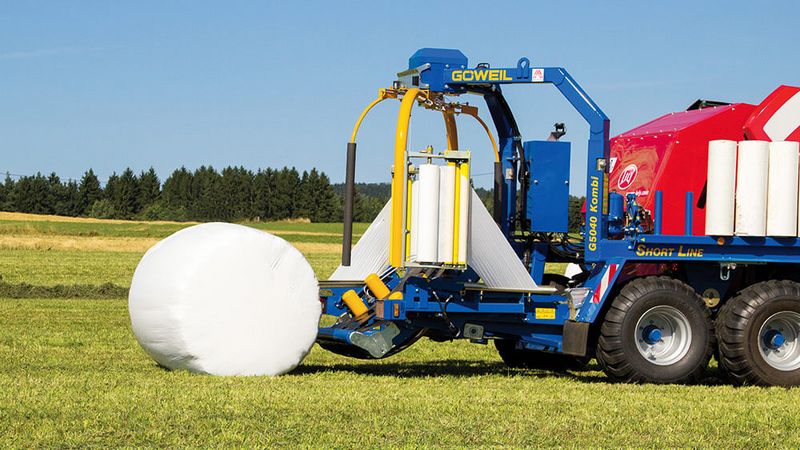 The twin wrapping arm is equipped with two 750 mm film stretching units. Three patented plastic rollers each provide for uniform stretching. What is more, the rollers are not sensitive to temperature. This helps save film and guarantees firmly wrapped bales. The stretching units are height-adjustable. This ensures that the bales will always be wrapped perfectly around their own center. The quick-release system makes it possible to change empty rolls quickly and effortlessly. The film monitoring unit will cut off the wrapping process if the film runs out or tears. 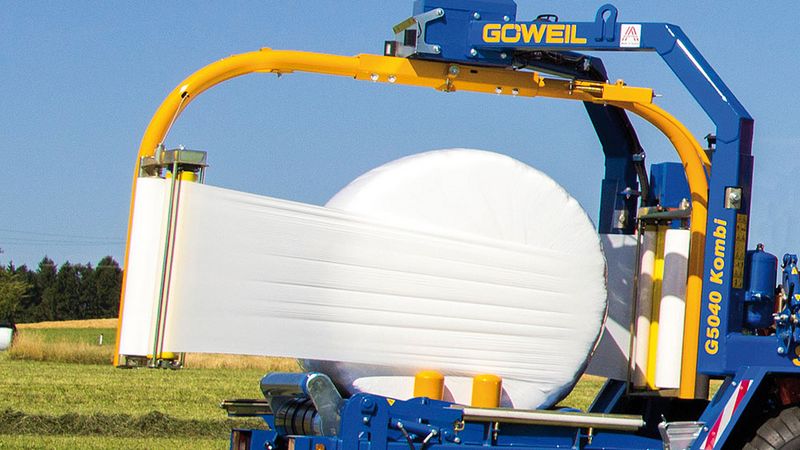 The standard hydraulic "Load Sensing" control system automatically adjusts the oil volume to consumption. This control system, thereby, not only performs several functions simultaneously, it also reduces fuel consumption at the same time. This results in a greater bale output per hour. The machine can also be operated in conjunction with tractors without load sensing pump. 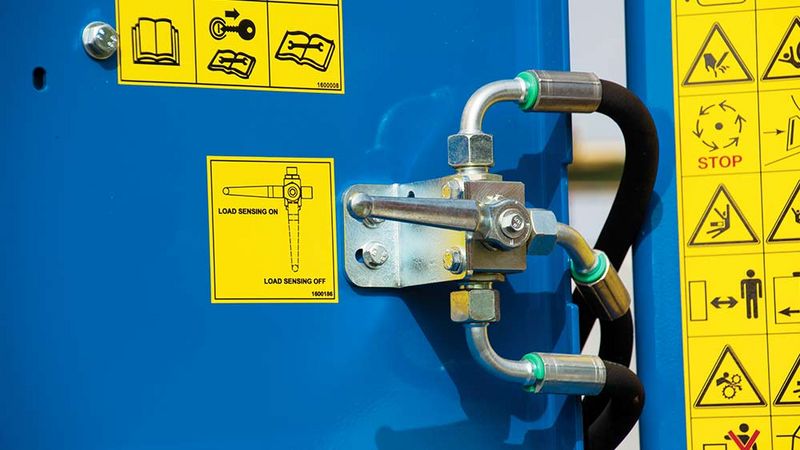 The stainless steel knives guarantee that the wrapping film will be cut cleanly and precisely. At the same time, the film is fixed in place by the cutter lever. Shortly after the wrapping process begins, the standard float position ensures that the films will unwind easily. 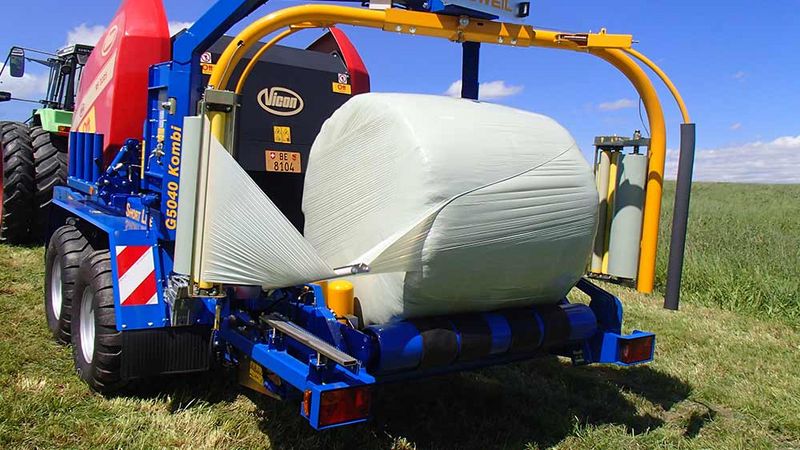